For a short while during the silver rush of the 1880s, Tombstone, Arizona, had a significant Jewish community. Some died and were buried there in the local cemetery — Boot Hill. There was a tendency for men to die with their boots on, they say. Hence the name.

The cemetery is now a tourist attraction. “Come see the plots and new markers of those who were killed in the Fight at the OK Corral.”

Jews, Indians, and Chinese were buried in a separate lot just below the hill.

An historical society was able to mark some of the Gentile graves on the hill and map it out for tourists. They had located enough historical documents for the task.

Not so the Jews. A club in south-central Arizona, though, sponsored a single memorial marker dedicated to:
The Jewish Pioneers and Their Indian Friends / Erected by the Jewish Friendship Club of Green Valley 1984. 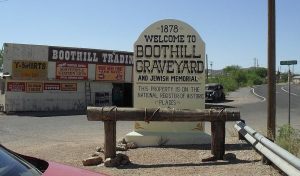 Some of the “friends” were also Chinese.

Green Valley, Arizona, lies on the highway south of Tucson on the way to Nogales.

The New York Times reported: “An Old West Cemetery for Jews Is Rededicated in Tombstone,” February 29, 1984.

The famous main theme of “The Moldau” comprises the first musical stanza of “Hatikvah,” the Israeli national anthem, with slight changes.
These changes for the anthem may reflect origin in “La Mantovana, ” a widely popular melody in Renaissance Europe and more recent times.

“The Moldau” (“Vltava”), a symphonic poem by Bedřich Smetana, is from Má Vlast (My Country).

For more about “The Moldau” see Robert Cummings, www.allmusic.com.

The melody of the second stanza of the anthem shifts to “Russian Sailors Dance” in the ballet The Red Poppy,  from a Russian folk tune.

The Red Poppy , 1927, was the first Soviet ballet with a modern revolutionary theme according to Wikipedia.

Nationalism is “the egotism of a people only concerned with their own interests,” Macron said on Sunday, November 11, 2018, at the Arc de Triomphe in Paris. He was speaking to a gathering of national leaders to commemorate 100 years since the armistice that ended World War I. The armistice of November 11, 1918, marked a victory for the Allies and a defeat for Germany.

“By putting our own interests first, with no regard for others, we erase the very thing that a nation holds dearest, and the thing that keeps it alive: its moral values,” the French President said.

(as translated into English from French)

(As reported by The Washington Post, “Macron denounces nationalism as a ‘betrayal of patriotism’ in rebuke to Trump at WWI remembrance,” in its video stream, and by the Associated Press.)

The Jerusalem Governate according to the PA

Maps have been digitally altered by Nesanel Segal from the source versions.

I’ll fill out this post when I find my college text book on the topic of the U.S. Constitution and the presidents.

They left Romania for Paris with their first born Yonah Leib (“Jean,” then “John”) around 1900. Romania and France were on good terms because France was a European advocate for Romanian nationalism against the Ottoman Empire.** On a personal level, the Romanian language is a Romance language like French.

After about ten years they left Paris for Milwaukee, Wisconsin, where my great grandmother had an immigrant sister and a brother-in-law. I can’t say whether my great grandparents arrived in Paris with papers or not, but I’m almost certain about the family tradition that they came to the U.S. without papers.

The family first appears in the 1920 United States Federal Census as living in Chicago. Even so, my Zeide (Grandfather) John does not appear to be living in the family home or anywhere else that I’ve found. Family tradition was that John was working at the Ford Motor Company in Michigan.

So how did my great grandparents enter the U.S.? I surmise that they entered through Canada. Perhaps it was relatively easy to enter Canada from France, at least the Francophone part of France.

* la bouche – ‘mouth’ because of his luxuriant mustache. The family lost the French pronunciation /boosh/, it becoming /boozh/.

** See the subject of the “Eastern Question” – how the powers of Western Europe were supporting Greece, Serbia, Romania, and other countries in their independence from the Ottoman Turks.

A U.S. Department of State spokesperson announced on February 23rd, according to The Washington Post, that the United States will move its embassy to Jerusalem in May 2018.

You can view this article in The Washington Post, “National Security,” February 23rd, 2018.

My earlier post expressed skepticism about a move of the embassy to Israel’s capital city.